On the Saturday after Thanksgiving we brewed a douple IPA kit called Surly Furious.  I plopped the fermentation bucket down in my dingy basement and left it alone until yesterday.  However, while sitting at work yesterday I realized that there was no way the temperature in the basement was warm enough for the yeast to be doing it's thing so I decided that as soon as I got home I'd put toegther some sort of fermentation chamber on the fly just to get through this beer.

A couple years ago I backed a kickstarter for the BrewBit (note the website is outdated and I don't think it is really for sale anymore).  It's a cool digital temperature controller with a touch screen and a web interface.  However, I'd never gotten around to actually using it for anything other than a over-qualified beer fridge thermometer.  First world problem of the utmost degree.

Having the brewbit on hand made the process vastly easier and really makes a lie of the claim that this is a poor mans fermentation chamber.  That gadget was expensive.  But the rest of this "build", and I use that term very loosely, is as poor as it gets.

I didn't have any scrap wood in the garage at all but I did have an old crate-ish box I'd made for my daughters science experiment as an incubation chamber before so I used that as the basis.  I then took an old electric space heater I keep in my bathroom (which gets inordinately cold in the winter) and sacrificed my tush comfort to provide a heat source for the beer.  Finally I grabbed an old painting drop cloth and draped it over the box to hold in the heat.


That's it.  The whole thing.  You can see the heater on the right and the drop cloth clumped on the top.  Looks pretty damn shabby. 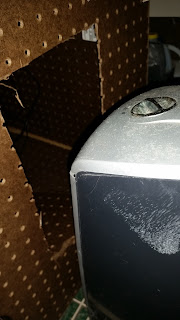 Here is a close up of the heater "vented" into the box.  The box is kind of weird, it's made out of peg board because it needed to allow airflow when it was an incubation chamber.  The big hole wasn't there when I started but I was worried the heater would over-heat the pegboard so I cut out the hole with a utility knife to let the hot air enter.

The basement temperature was down near 60 when I first set this all up and the BrewBit turned on the heater about a minute after I set it up but then, as the temp got close to 68 in the box the surge protector popped and the temperature fell.  I didn't realize it had popped until about 20 minutes later when I went to check on things.  To alleviate that problem I ended up running an extension cord from the brew bit upstairs and taking the surge protector out of the loop.  I didn't want to plug the brew bit in directly to the wall in the basement because if it popped the circuit breaker I didn't want our deep freezer to shut off.

As you can see it's doing a pretty good job.  It was on a one minute cycle but this morning I changed it to a 3 minute cycle (which was the default setting before I changed it).  I'll monitor it during the day but I think I'll be happy.


In the photo above you can see the bucket in the chamber.  The black thing is the power cord for the BrewBit.  You can't even see the temperature controller wire at all.  But if you look closely you can see bubbles in the vapor lock!

Here is a very crappy and short video of the fermentation in process.

Once this beer is in the keg I'll build a real fermentation chamber that is both more efficient and which will both heat and cool depending on the current conditions.
Posted by Bill at 7:15 AM