I've now participated in two separate kick starter campaigns to back bottle openers.  The first was the Gropener which is a bottle open I really dig.

The second was the Critter Cutter.  At my backing level I received three of the opener.  The first is the standard one, the second is a rainbow nitride coating, and the final was a black out nito-carbonizing coating.  All three look really nice in person. 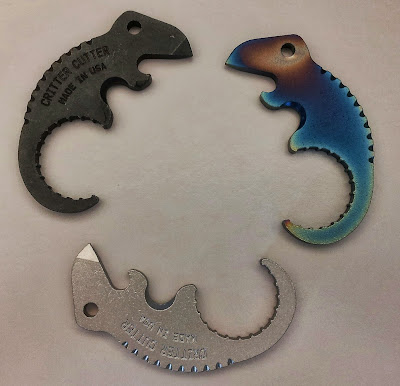 The nice thing about the three piece package is there are three of us in the Hops Alchemy group; myself, Mike, and Jason.  Thus I gave Mike the rainbow coated one, Jason the standard one, and I kept the black one.

If you like the Critter Cutter you can buy them online - they are very sturdy so I don't think you'll be disappointed.
Posted by Bill at 10:13 AM